Marconi at his desk

WIKI: [“They All Laughed” is a song composed by George Gershwin, with lyrics by Ira Gershwin, written for the 1937 film Shall We Dance where it was introduced by Ginger Rogers as part of a song and dance routine with Fred Astaire.]

They all laughed when Edison recorded sound

They told Marconi, wireless was a phony / It’s the same old cry

They all laughed at Whitney and his cotton gin

They all laughed at Fulton and his steamboat

Hershey and his chocolate bar

Ford and his Lizzie kept the laughers busy

That’s how people are…”

True that, as the kids might say. That’s how people are. Why is doing something new such a big deal? Why is it that people go crazy whenever a person tries to stop an old mistake, or make something new that makes things better?

You’d think we’d have gotten over it by now—or at least learned not to be panicked by the new.  When astronomers said the Sun didn’t go around the Earth, I could see why some of them could have been burned at the stake—it was a long time ago, and who really knew anything, right? But then they used that information, along with telling time, and a compass, to navigate out of sight of shore.

Did the big bosses at the Vatican say sorry? Well, yes, they did. But it was just a year or two ago—like, six centuries too late for those crispy scientists-on-a-stick—o, well! Then there was slavery. It’s eerie how the Spielberg film, “Lincoln”, showed legislators in Congress debating whether slavery should be forbidden—very similar to the same scenes in old movies, and in modern movies and now on CSPAN (et.al.) right up to the latest news-cycle—like recently, when the government shut down for two weeks because they were against something new, I was watching CNN, CSPAN, and the PBS-related news-programs. At times, these days when I have too much time all the time, I’ll have to sometimes check myself, and differentiate the ‘current events’—extended TV show and any of the fictional entertainment I might be channel-surfing past.

We watch “Lincoln” and we think to ourselves, well, of course they’re going to prohibit owning people—but that’s only because we know how it ends. At the time, those conservative yahoos truly argued, with straight faces, against the criminalization of their presumption of superiority. The more frightened they were at the thought of changing the status of the African-Americans from chattel to citizenry, the harder they argued to keep things as they were. One might speculate that having a vehement opponent—which righteousness is prone to be—the conservatives’ fear of the unknown may have been brought to the level of panic by the addition of the sense that they were being rushed into something. Either way, there is neither any change in a conservative’s feeling of being rushed nor in his, or her, belief that all change is a bad thing.

I was young enough to be surprised about the male uproar over women’s lib, as it was labeled in my day—I thought, here we’re well into the fight for racial equality—most intelligent people have come to feel uncomfortable with showing themselves to be bigots in public—and yet the simple commutative principal that I’d used to equate accepting the equality of African-Americans with our own mothers and sisters—and daughters—being given that same equality before the law—and, rightfully, in our hearts—this ‘elephant in the room’ of mine was invisible to many men. And it was easy to see why—they were terrified—they’d seen too much Donna Reed as children—and someone was trying to shut down all the Stepford Wives, leaving them with a bunch of chores they didn’t know how to do—and that part was just scratching the surface. Shunning had thrived in the later centuries, under its new guise of ‘propriety’. The World Wars that take up the first half of the twentieth century kept everyone’s face in the dirt. But once we woke up to the 1950s, women had both served in an official capacity—nurses and WACS and WAFS, etc.—and in bomber-manufacturing, etc., at home—the majority of them weren’t about to object to the dream of keeping a nice big house while the man did all the paid work. But indoor plumbing, a modern range-oven, washer-dryer, vacuum, station wagon to the market—all such activities had reached a tipping point.

We had reached a civilization milestone—a woman no longer required the full twenty-four hours of each day to do the once-gargantuan task of doing all that stuff without appliances, or hot and cold running water. It passed by with little fanfare—no doubt most men suspected their ‘homemakers’ weren’t really ‘working’, you know, like they were—and saw no great change being implied. Big mistake. Women work very hard—in my experience most women work harder than most men. Once they could reach the end of the work before the end of the day, they didn’t stop working. The just started working on new things, new ideas—and you know, I’m sure, how that kind of nonsense ends up, right? Yeah, next thing you know, they’re saying, “Hey, we didn’t care when we were too busy to listen to your bull, but now that we have the leisure to consider your verbal nonsense, you’re starting to piss us off.”

Now, I saw this coming a mile away—I just couldn’t believe the conservative line on women’s lib—bunch of Bible stuff and a dash of reductionist sociology, et Voila! Nothing. What can one say? Am I going to walk up to my mother and tell her she doesn’t deserve as much respect as I do? In what universe?

It’s a constant drum-beat throughout history—Monotheism is an abomination—kill the Pharaoh! Christianity is wrong—kill the Christians! The Christians are in charge—kill the non-Christians! Alchemy is witchcraft—kill the chemists! Astronomy is sacrilege—kill the mathematicians! And—you know—I just wanted to pause here, and consider that there has been a major change—we don’t just kill people in bunches any more—well, most of us, most of the time, anyway.

And so the new fashion is to ridicule discoverers and inventors and explorers or scientists in general. We’d still kill you for some atrocities—like if you were gay or transvestite or Jewish or Gypsy… ..well, anyway, a lot of murders go unsolved, even today when every drama show is a training tape for the police academy—so you can imagine how easy it was for the sociopaths to prey on the outcasts in earlier times, up to say, the 1950s and 60s.

After that, the FBI started using new evidence collected through science—and now it’s like a science fiction movie what the police go through at, say, a murder scene. But we still haven’t changed anything about our prisons—there was a time of optimism, when Robert Redford played a new prison warden (with a heart, of course) and they took to re-naming prisons as ‘rehabilitation centers’, but there is no significant change in the way we punish criminals—except they have to do their time without a cigarette nowadays.

I don’t know nothing about criminology—all I know is no one changes anything about prisons—and I’m pretty sure we have found better ways to deal with criminals by, what’s it today? –2013, yeah—well into the twenty-first century and we still put people in cages—that’s just wrong. We’re not even trying, on that one. 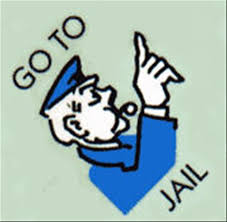 But aside from prison and the grave, ridicule can still do harm to people that are only trying to make things better. Those germ guys—Lister and Pasteur, the established medical community gave them both a very hard time. Did they spend years afterwards, giving speeches of apologies—no, that doesn’t happen. The ridicule—always—the sincere retraction and apology—only spoken of, never witnessed, to my knowledge.

Who else—O, yeah—the whole electricity crowd—people refused to believe Bell when he first demonstrated it in public—not everybody, just the you-know-whos. And Marconi’s wireless radio, O—and I almost left out the big dog, T.A. Edison—let’s tick’em off, shall we? 1st Electrical Turbine, 1st Light Bulb, 1st to offer Electricity to Homes as a Public Utility, 1st Audio Recording, 1st Record-Player, 1st Motion Picture—and those are just the highlights—and  that’s not mentioning the many developments of these basic inventions throughout his many years of experimentation. Now Edison, as you may imagine, was found to be difficult to laugh off—sure, one could grumble about ‘new-fangled’-this and high-falutin’-that—but at the same time, you can see where you’re going, indoors, in the dead of night; there was no open flame in every room any longer—and no need for candles and oil lamps. And one could listen to a symphony play Beethoven, right in their own parlor—it sounded a little more professional than the family’s traditional caterwaul. Edison was like Euclid that way—like him or not, he’s hard to argue with.

So I’m learning all this stuff in elementary school, and even then I noticed that any big advance in civilization involved someone being given a very hard time, ranging from laughed-out-of-town to burnt-at-the-stake. And I see it on TV—African-Americans in the southern states standing up to people that would do anything to keep those protestors relegated to second-class citizenship. And I thought to myself, hey, it’s Galileo and Louis Pasteur all over again—can’t they see they’re trying to hold back civilization’s natural impetus towards making us a better people, a fairer people, a kinder people? And after the race riots, the news showed the Viet Nam war—people killing and dying—I think that must be a bad scene in real life—I didn’t even like seeing it on TV.

Conservatives—are they the natural result of an evolutionary process that makes most of the herd dislike change, while only a few will go rogue and strike out after something different? Is that why they’re so politically powerful—because at heart most people don’t want change of any kind? Is that why rabble-rousers have to do so much rousing? Is that why every great person will eventually find themselves wondering if they’re crazy? And, if so, is that the corollary to all crazy people thinking they make perfect sense?

All good questions, but I digress. I had a point to make here—I’m almost certain of it. ‘sfunny how you get an idea about something big-ish like ‘social progress’ and no matter where you turn, you’re always getting caught up in details that don’t even make sense after a while? Well, this is one of those—sorry.

I really enjoyed that PBS part 1 of 2 Kennedy; American Experience—hope I remember to watch the end tomorrow night. O, and here’s a video of just me and another video of me playing some Bach: